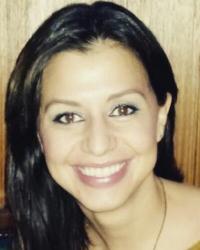 Dr Carolina Perez-Rodriguez is a female Specialist Prosthodontist who speaks Spanish (as well as English).

Carolina graduated from the University Complutense of Madrid in 2006. After completing her studies she moved to Oxford (UK), where she worked as a general dentist and undertook further studies in restorative dentistry, prosthodontics, and implants in London, Manchester, and France. During this time, she gained membership of the Royal College of Surgeons (UK).